Saudi Summer to Unveil the Most Famous Tourist Sites


The Kingdom of Saudi Arabia abounds with natural ingredients along its vast area that varies between coasts extending on the Red Sea in the west and the Arabian Gulf in the east,

154 Views | the publication reaches you by | Saudi Arabia Today


which includes hundreds of islands, green mountains in the southwestern regions, agricultural oases in Al-Ahsa and forests in Asir and Al-Baha.

The regions of the Kingdom are characterized by a cultural heritage for thousands of years, which extends in sites recorded in the UNESCO world heritage, the most prominent of which are the historic Diriyah, the Hail Heritage Jubbah, the historical Jeddah, and the Al-Ahsa Oasis.

The Saudi Tourism Authority launched the “Summer of Saudi Arabia” season titled “Tanaffus” or “Breathing” from June 25 to September 30, 2020;

The Kingdom of Saudi Arabia is working through the Ministry of Tourism and the Saudi Tourism Authority to form the national tourism vision that accompanies the goals of Saudi vision 2030, where in the coming years we will witness a major shift in the tourism industry, enhanced by the availability of a specific infrastructure covering all regions, and natural diversity and historical treasures will have a presence in shaping National tourist painting, competition regionally and internationally.

Diriyah represents the culture and heritage heart of Riyadh, which consists of several districts, including, Al-Bujairi and Al-Turaif. These two districts were included in the UNESCO World Heritage List in 2010, as the region has beautiful architecture.

The journey will not be complete without visiting the old markets of Riyadh, and enjoying its products, such as the historic Souk Al-Zal in Riyadh, in which various products of traditional handicrafts of woven carpets, spices, incense, traditional clothing and antiques are displayed.

The Edge of the World is one of the most visited tourist destinations in Riyadh, as it is separated from its visitors by a winding path along a hill leading to the highlands of Tuwaiq to unveil a captivating landscape of its valleys, and its breathtaking horizon on a high-rise called the “Edge of the World”, located 90 kilometers from the city of Riyadh It is part of the vast slopes of Tuwaiq, which extend to more than 600 kilometers in the center of the Kingdom of Saudi Arabia, and it was overlooking an ancient commercial road used to cross the Arabian Peninsula from Yemen to the region of Syria.

When visiting the Kingdom, it is necessary to stop in Jeddah, as there is no place comparable to its charm, its pace of life and markets, and the old town, not to mention its coast, as it is the gateway to Makkah with its ancient Islamic history.

Jeddah has acquired a historical dimension, when you visit “Al-Balad” area that was built in the 17th century, you will enjoy one of the unforgettable experiences. There are subtle restorations on the houses and alleys to preserve the area’s charm and authenticity.

Jeddah Corniche is the most popular area, as it is in area of more than 30 kilometers that embraces the waters of the Red Sea, with many restaurants, entertainment places and parks for rest and relaxation. 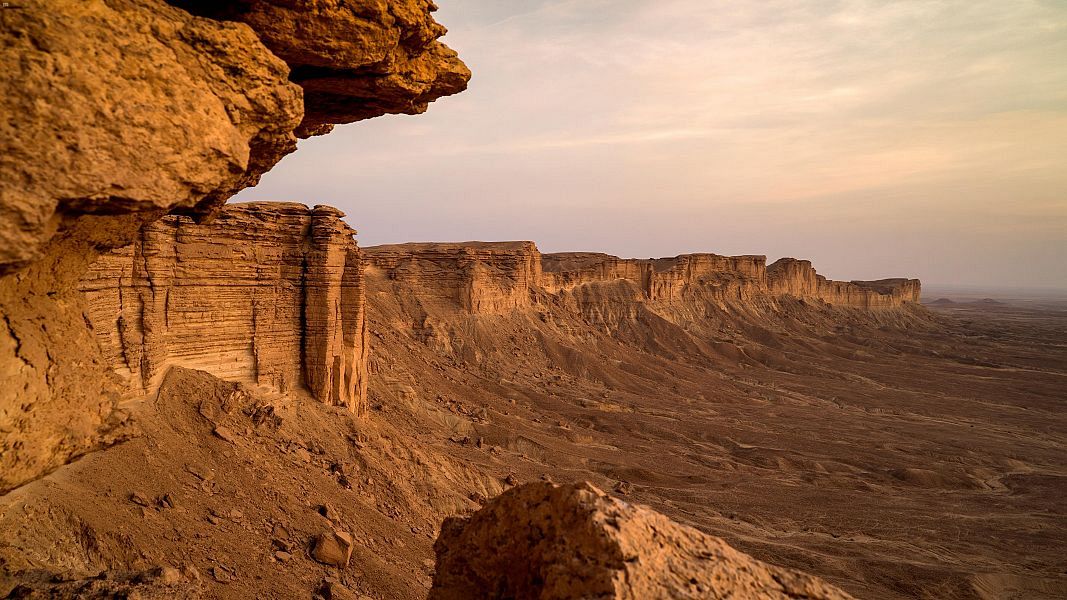 The art scene has flourished in Jeddah, and today in the city’s galleries that fit everyone’s taste of modern art, most notably the Jeddah Sculpture Museum, which is located on the Corniche, and includes an amazing collection of pieces dedicated to Jeddah, including the works of Henry Moore, Jean Arp, Alexander Calder and Joan Miro, in addition to the city of Al-Tayebat International Science and Knowledge, which is one of the important places to visit, the museum includes a wide range of monuments dating back to Islamic history and pre-Islam period.

Taif had the biggest share of Saudi domestic tourism. The city was titled “City of Roses” and “Bride of Resorts” for its summer temperate climate.

Taif is known for touristic attractions like museums, parks, local markets, and farms of fruits & aromatic flowers/roses. In addition, cultural centers like Souk Okaz, which is one of the key oldest markets where artists, poets and intellectuals gather.

The city has many landmarks like Shubra Palace that is part of Taif Regional Museum and Telefric Al Hada, which goes up to Al Hada Mountain and down to Alkar village resort.

Visitors enjoy the historical, economic and cultural heritage of the Eastern region where Dammam is the capital city, the hub of cultural landmarks and oil & gas industry. King Abdulaziz Center for World Culture (Ithra) is a cultural destination for arts, science, arts and innovation. It is recommended to spend a day at the Center to enjoy its library, theater, cinema, museums, galleries, Idea Lab and workshop venues.

Tourists can also visit Dammam’s local village to have a full experience of the Saudi life.

Al-Ahsa city in eastern of the Kingdom of Saudi Arabia, is known for spectacular green scenery listed in UNESCO. The city also has one of the largest oases worldwide and historical sites that go back to Stone Age.

The Calcic Continent Hills, which is 200 meters above sea level, overlook astonishing scenery of the neighboring area. You can also take a tour inside the cave maze and passages dug through the rocks.

Al-Ahsa also has Jawatha Mosque (built in 7th AH) and Ibrahim Palace (built in 1st Saudi State), the latter has Quba mosque and a museum with diverse artifacts and paintings.

Asir region is located among the southern mountains of the Kingdom of Saudi Arabia. Visitors may take a tour to see the beauty of Abha, the capital city of the region. Visitors may also enjoy the local historical sites and the highest summit in Arabian Peninsula in Al Soudah Park. The summit is over 3000 meters height, while the park is naturally gorgeous with vast green scenery where it rains the most in Asir, with a dense forest of Juniper trees.

It also provided the park with hanging cars “cable cars” to reach its visitors to Al-Aws Park with Rijal Almaa, where there is the museum, heritage library and archaeological palaces. 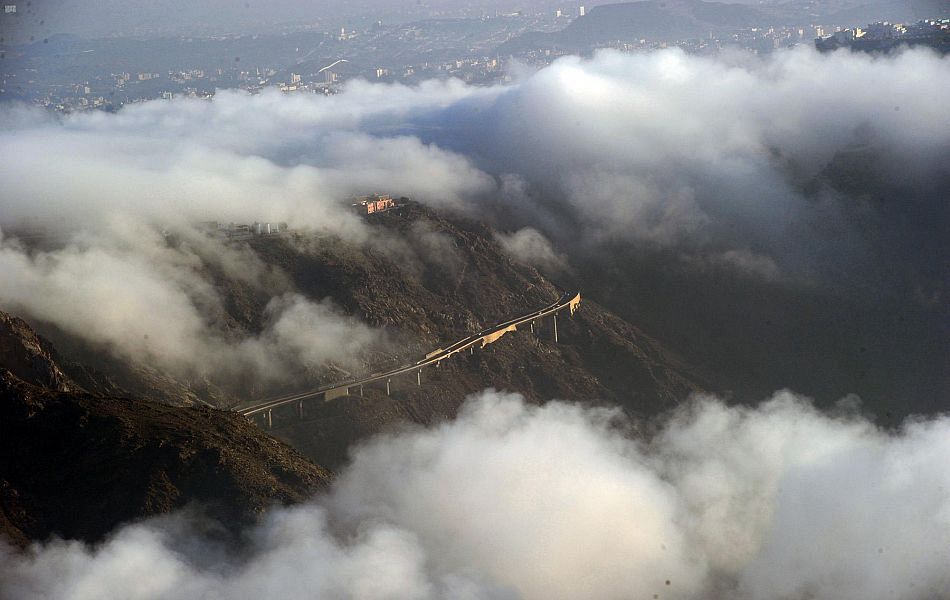 Al-Baha region is a historical museum open to the top of a mountain of white rocks, dating back more than 400 years, and includes Raghadan Forest Park, which is a rugged natural area qualified to become one of the most important tourist attractions in the area, it connects to the village of Dhi Ain through winding roads and valleys.

One of its famous landmarks is the village of Shada, which is located halfway to the summit of Jabal Ibrahim, and features scenic landscapes between the highlands, green cliffs and valleys of the Sarawat Mountains.

The coasts of Tabuk and Jizan, and the coasts of Yanbu, Rabigh and Jubail, compete to project a distinctive picture of tourism in the Kingdom of Saudi Arabia.

“Breathe the spirit of Saudi Arabia”, the most beautiful title to spend most enjoyable times, and get acquainted with the ancient Kingdom’s treasures, ancient civilizations, rich heritage, and diverse culture, which narrates the history of the Arabian Peninsula.