Pakistan last week repaid a $1 billion Saudi loan that was called in after Pakistan began insisting that Saudi Arabia allow it to marshal the Islamic world’s support on the Kashmir issue.


The $1 billion to repay the loan came from China in the form of another loan.

The original loan was a part of a $6.2 billion package announced by Saudi Arabia in November 2018, when Islamabad was struggling with a rapidly expanding trade deficit and declining foreign reserves.

The package included $3 billion in loans and a $3.2 billion oil credit facility.

Saudi Arabia at the time was something of a white knight, providing much-needed cash before the International Monetary Fund approved a $6 billion bailout in July 2019.

According to Pakistani media, the oil credit facility was suspended in May, with the Saudis later asking Pakistan to also repay the loan in full.

The countries’ relations deteriorated quickly, beginning in February when Saudi Arabia turned down a request by Pakistan to convene a special meeting of the Council of Foreign Ministers of the Organization of Islamic Cooperation. Islamabad did not back down, demanding to use the OIC to pressure India on the Kashmir issue. It was then that Saudi Arabia decided to call in the loan. 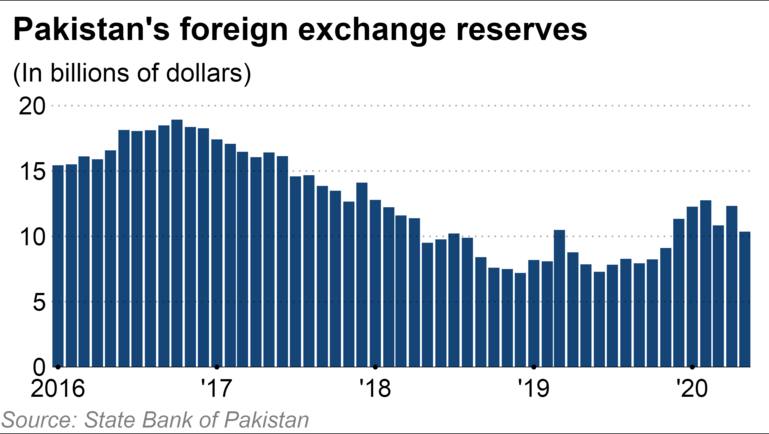 The OIC is a group of 57 Muslim countries that is largely guided by Saudi Arabia.

India and Pakistan have been disputing claims over Kashmir since gaining their independence from Britain in 1947. Each of the neighbors controls parts of Kashmir, but they also have overlapping claims.

Since 1963, China has controlled the Aksai region of Kashmir. Lately, China has adopted an aggressive posture toward Kashmir that favors Pakistan. This has resulted in a number of border clashes, including ones with India that erupted May and June.

Last week in a TV interview, he said, “Today, I am telling the OIC to convene the meeting of the council of foreign ministers. If they cannot do it, then I will be compelled to ask the prime minister [Imran Khan] to call a meeting of Islamic countries [Iran, Turkey and Malaysia] that are ready to stand with us on the issue of Kashmir.”

The latest developments have also cast doubt on the future of memorandums of understanding that call on Saudi Arabia to invest $20 billion in Pakistan; they were signed during Saudi Crown Prince Muhammad bin Salman’s visit to Pakistan in February 2019.

The proposed investments include $10 billion in an oil refinery in Gwadar, a port city that because of its strategic location at the mouth of the Gulf of Oman has made it a focal point of the $50 billion China-Pakistan Economic Corridor, itself a big part of China’s much wider Belt and Road Initiative.

Experts believe Saudi Arabia is reluctant to become entangled in the efforts of Pakistan and China to contain India.

“Saudi Arabia is closely allied with the U.S., which may also be [applying behind-the-scenes pressure on] Saudi Arabia to stay away from Chinese initiatives,” said Jeremy Garlick, an assistant professor with the Jan Masaryk Center for International Studies at the University of Economics in Prague.

Garlick is also the author of “The Impact of China’s Belt and Road Initiative: From Asia to Europe.”

“It is probably less risky for Saudi Arabia to withdraw its support for Pakistan than to stay in Gwadar,” Garlick told the Nikkei Asian Review, “since Pakistan is so closely allied to China and both are forming a wedge against India.”

James M. Dorsey, a senior fellow at the S. Rajaratnam School of International Studies at Singapore, believes close economic ties between the Saudis and India are driving the kingdom’s change of heart toward Pakistan.

“Saudi Arabia has significant investments in India, which is also a major buyer of oil from the kingdom. Consequently, Riyadh has been less forthcoming to extend support to Pakistan’s stance on Kashmir,” Dorsey told Nikkei. Protestors in Peshawar, Pakistan, chant slogans during a “Kashmir Hour” demonstration called to show solidarity with the people of Kashmir in August 2019.   © Reuters

Other experts say the Saudis are on a diplomatic high wire and are sure to try to find a balance. “Saudi Arabia also needs Pakistan due to its proximity with Iran and being home to world’s largest Shiite minority,” Dorsey said. He added that the Saudis will try to do something on the issue of Kashmir to placate Pakistan but not go so far as to provoke India.

Experts believe the Saudis are not alone in exercising caution, that Beijing is also wary. “China needs Saudi oil,” Garlick said, adding that it will “play a waiting game at this stage and try not to become involved in Middle Eastern politics for as long as possible.”

Einar Tangen, an author and economic affairs commentator based in Beijing, maintains that China’s approach to the Islamabad-Riyadh tiff is more practical than ideological. “China needs multiple land and sea routes to protect its economic interests,” he told Nikkei, “hence regional divides will not serve China’s interests.”

Analysts fear the Islamabad-Riyadh spat will make Pakistan further reliant on Chinese loans. “With China, Pakistan has put all its eggs in one basket at this stage,” Garlick said, adding that Pakistan has a difficult task ahead — finding more allies.