Saudi Arabia is slashing oil shipments to US, a tactic that boosts prices and may rile Trump


Saudi Arabia is slashing shipments of crude to the United States, a move that appears calibrated to boost oil prices after a swift and punishing sell-off.

1023 Views | the publication reaches you by | Saudi Arabia Today


The move could put the kingdom at loggerheads with President Donald Trump, who wants to drive down energy costs for Americans and frequently accuses the Saudi-led OPEC cartel of jacking up oil prices.

The Saudis are loading fewer barrels on ships bound for the United States this month, continuing a trend that began in September, according to an analysis by tanker-tracking firm ClipperData.

The firm’s loading estimate suggests that U.S. imports of Saudi crude oil could soon fall toward the lowest levels on record.

It’s a tactic the Saudis used last year to amplify their main strategy for draining a global crude glut and propping up the market: cutting output alongside fellow OPEC members, Russia and several other producers. 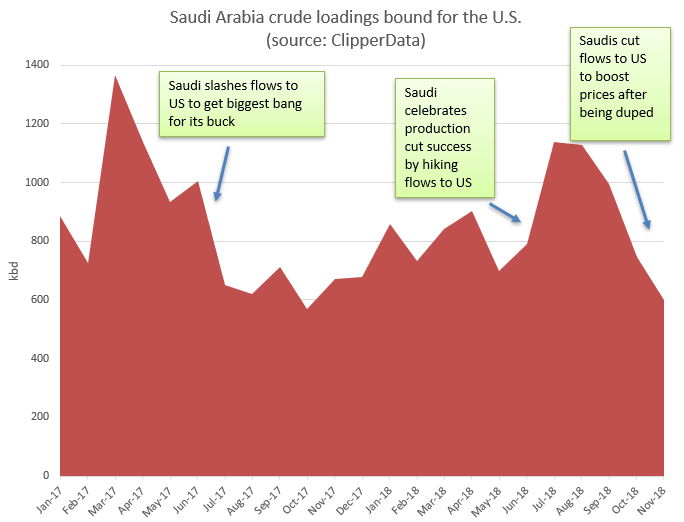 The maneuver shows how Saudi Arabia’s efforts to manage the oil market have evolved. During the 2014-2016 oil price crash, traders closely monitored weekly U.S. stockpile data to see whether oversupply was shrinking or growing. As the world’s biggest exporter, Saudi Arabia realized it could nudge the data in a direction that boosts the cost of crude.

“It worked so well in 2017 for [the Saudis] to cut flows to the U.S. because people could see the inventories dropping because U.S. data is so timely and transparent,” said Matt Smith, head of commodities research at ClipperData.

“The markets have become more transparent through tanker tracking,” Smith said. “You can see those changes being implemented more, and [the Saudis are] aware of that.”

Shortly after Falih issued the warning, Trump took to Twitter to voice his disapproval with that plan.

CENTRO Olaya, the sixth by Rotana Hotel in Saudi Arabia and the third in Riyadh, was inaugurated on…

Is the oil price war between Saudi...