58 Views | the publication reaches you by | Saudi Arabia Today


While Saudi Arabia is often seen as a vast desert nation void of creativity, it has, in fact, been home to a small but thriving cultural scene for over a decade—one built largely by the kingdom’s women.

Despite many legal and bureaucratic challenges, Saudi women have been at the forefront of a growing cultural landscape.

As a tsunami of government funding floods the Saudi Arabian cultural sector with the announcement this February of a planned $64 billion investment in the entertainment and cultural sector over the next decade, it is crucial that these waves of cash not wash away the legacy and achievements of these female pioneers.

The Saudi art scene has developed at a slower pace than the neighboring Dubai, and has come largely from the bottom up, primarily through private local initiatives, in contrast with the state-guided (and funded) approach taken by neighboring countries such as the United Arab Emirates and Qatar.
For over two decades, the strong presence of female patrons, established female artists, and young female artists has been a key feature of Saudi’s art scene.
“In Saudi Arabia, women have always been culturally acknowledged as the ‘artists,’” said Eiman Elgibreen, artist and art historian at Princess Nourah bint Abdulrahman University in Riyadh, citing Bedouin women who weave decorative textiles and the female house-painters of Saudi Arabia’s southern Asir region, where women create brilliantly colored murals in the interiors of their homes ane decorative patterns on the exterior. “They have long been responsible for producing the visual creative products of the country.” 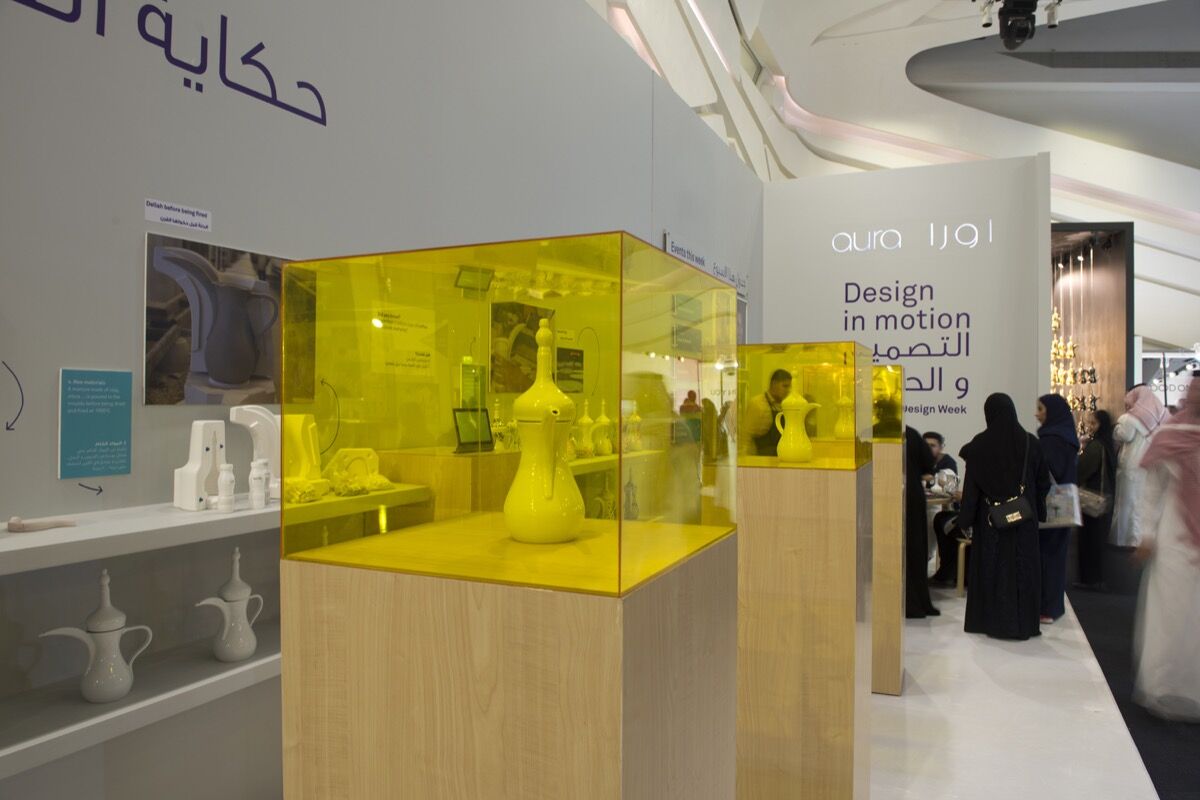 One of Saudi’s first modern art exhibitions was held in Jeddah by local painter Safeya Binzagr more than 50 years ago, before the city even had any art galleries (instead, it was shown at Dar Al-Tarbia Al-Hadetha, a school for girls).
Binzagr has continued to be a fixture in the country’s art scene, having opened a museum in Jeddah in 2000, which made her the only artist in Saudi Arabia to have their own museum. The museum not only exhibits her artwork, but also her decades-long research in the country’s regional textile traditions.
More recently, women have been at the forefront of the majority of the kingdom’s contemporary galleries, creative incubators, and art schools. In 2007, Princess Adwa Yazid bin Abdallah Al Saud founded the Arts and Skills Institute, the first visual arts school in the capital city of Riyadh.
Alaan Artspace was one of Riyadh’s first galleries, founded by Neama Al-Sudairy in 2012 and active until last year. Another space in Riyadh, Naila Art Gallery, was established in 2012 by artist Naifa al-Fayez and also functions as a creative hub in the city, hosting a variety of workshops, art talks, and seminars, and offering mentoring opportunities to local emerging artists.
Jeddah’s Tashkeil, founded in 2011 by Sofana R. Dahlan—one of the first females to have been granted a permit to practice law in Saudi Arabia—supports local creative industries with incubating and mentoring services. These creative programs and projects—almost all headed by women—have generated opportunities for local designers, artists, and makers to not only showcase their work, but also develop professional skills.
Saudi women have also helped develop new links between Saudi Arabia and the global art and design world, both by disseminating information about the kingdom’s growing arts scene, and through events such as Saudi Design Week. 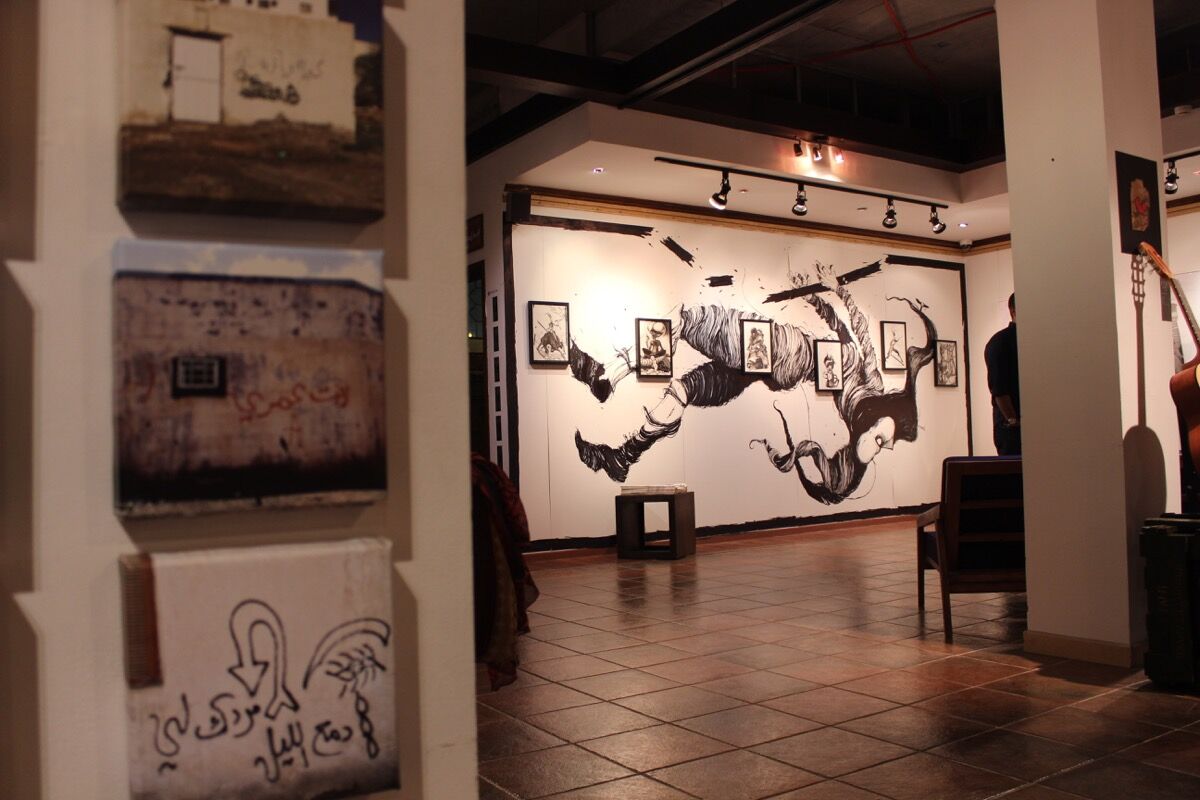 Maria Mahdaly co-founded Rumman, a media and publishing house in Jeddah, with Enas Hashani and Bayan Abuzinadah in 2007. The company now publishes three monthly city magazines, featuring Jeddah, Riyadh, and Sharqiya.
Basma and Noura Bouzo founded Oasis Culture and Arts magazine to highlight creative talent in Saudi Arabia and the broader Gulf region. By 2014, the Bouzo sisters were ready to showcase that talent in real life, launching Saudi Design Week, now an established fixture in the region’s cultural events calendar.
The four-day event is now in its fifth year and attracted 20,000 visitors in 2017 in Riyadh, the country’s largest city with a population of over 7 million. Female designers and creatives made up 65 percent of the fair’s participants, as well as the majority of its attendees over the past four years.
The fair focuses on regional and international art and design in a multitude of mediums, and features an array of interactive exhibits, installations, workshops, and exclusive talks. The sisters have gone on to curate exhibitions at Dubai Design Week and the London Design Biennale, expanding the influence of the contemporary Saudi design scene in the global design arena.
“Our aim is to expose the design talents of Saudi Arabia, and get them both a local and international platform to be included in the overall design discussion,” said Basma Bouzo. “It is important for the international design scene to acknowledge the existence of a Saudi design scene, and also equally important for Saudi designers to learn and expand their knowledge with more exposure.”
Platforms that aim to provide a supportive creative ecosystem are found throughout the country. In Al Khobar, a port city on the Arabian Gulf, Raneen Bukhari, a Saudi curator and creative entrepreneur, has long been working on a variety of projects that focus on creating opportunities in the country’s creative art and cultural economy.
In 2012, Bukhari started LOUD Art, partnering with NTI & Co., a female-led creative agency. The platform focuses on emerging artists who want to showcase experimental art in the country. Each annual edition of LOUD Art is based on a broad theme and opens annually each May in Desert Designs Art Gallery in Al Khobar, before traveling around Saudi Arabia and the Gulf. 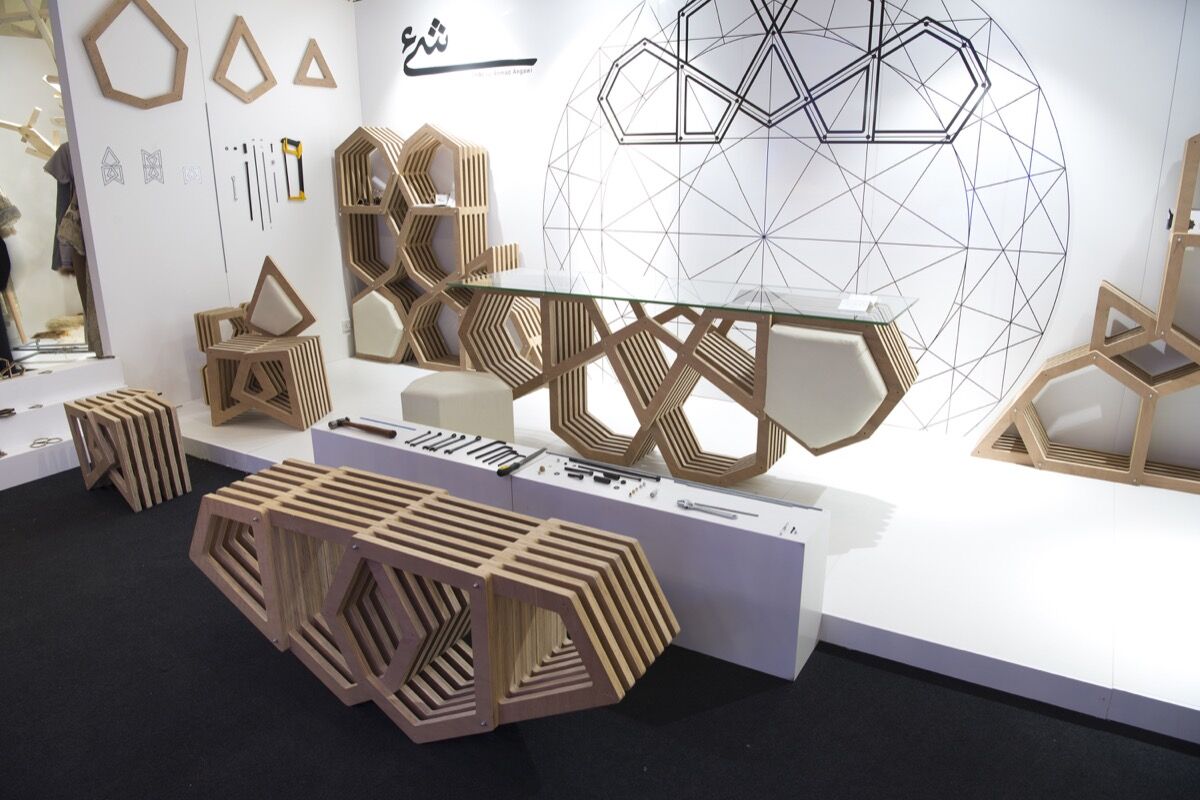 “I felt there was something missing in the art scene in Khobar,” Bukhari said, citing a lack of experimentation in particular. LOUD Art was one of the first avenues for emerging artists in the country to advance, showcase, and sell their work, and it has gone on to partner with regional platforms such as the Kuwait-based NUQAT.
Bukhari and her fellow creative pioneers faced a wide array of challenges getting their events and venues off the ground, not least Saudi’s creaky bureaucracy, which was ill-equipped to permit and oversee this new genre of events.
“There were a lot of challenges around both getting funding and getting permission from the government,” said Bukhari. “The system to ask for the official permission to host an event was always changing.”
The government appears to recognize that streamlining bureaucracy is an important part of modernizing the cultural sector. In 2016, the General Entertainment Authority (GEA) was formed by royal decree to expand the nation’s entertainment sector. The GEA has since launched an online “License Portal,” which brings together, in one hub, the various agencies and authorities needed to issue permits, helping facilitate and expedite event planning in the Kingdom.
That’s one step the government is taking as part of a larger initiative, led by 32-year-old Crown Prince Mohammed Bin Salman, to grow Saudi’s creative industries as a means to diversify the oil-producing nation’s economy. In 2018, the country’s Council of Economic and Development affairs launched a $35 billion quality of life program that primarily focuses on culture and leisure.
The General Culture Authority (GCA) was also established in 2016 as a separate culture body dedicated to cultural development in Saudi Arabia. With plans of organizing 100 cultural events across the Kingdom in the next year, the government body is ensuring women are represented, and boasts 54 percent female employees. 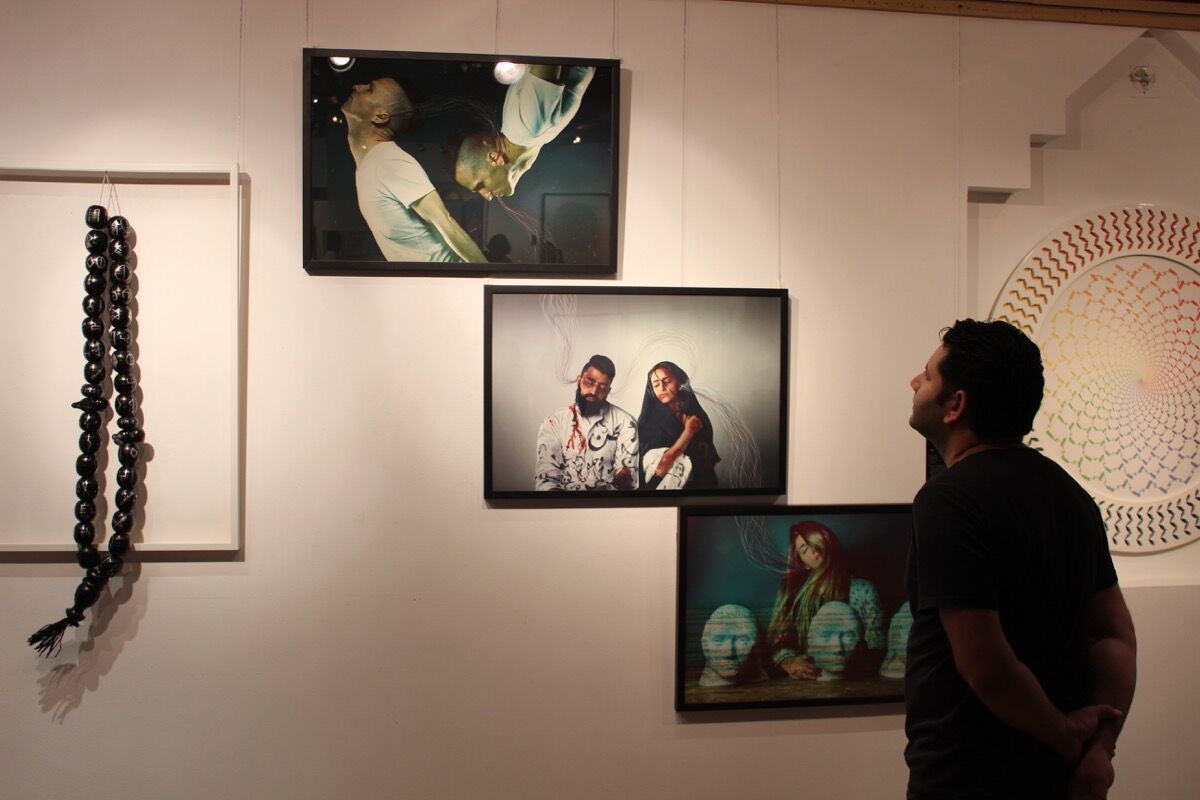 There are early signs that the government has recognized that Saudi women’s skills and expertise in this sphere are key to seeing the industry thrive.
Noor Al-Dabbagh, who previously founded Banafsajeel, a curatorial platform facilitating the exchange of ideas through creative collaborative projects in the GCC, was appointed the position of head of visual arts for the General Culture Authority in February 2018. She is tasked with expanding visual arts events across Saudi Arabia to include supporting education and training programs, and helping further develop regulatory frameworks to make exhibitions and events easier to host in the country.
In the early years of women’s education in Saudi Arabia, they were limited to studying arts and education, while men could choose from a wide variety of subjects. Saudi women are not just foundational to its art history; they should be its future, too.
While Saudi women in 2015 represented more than 52 percent of university students, their skills and education are not yet being fully utilized in the labor market, despite government pledges to bring the share of women workers to 30 percent by 2030. But with the growth of opportunities and prestige in the creative sector, it could be vulnerable to male takeover.
“Culturally, creative industries were thought to be more suitable for females than males, but that perspective has changed greatly in the past few years with the government support,” said Bouzo. “There’s more of a career longevity in the creative industries than ever before.”